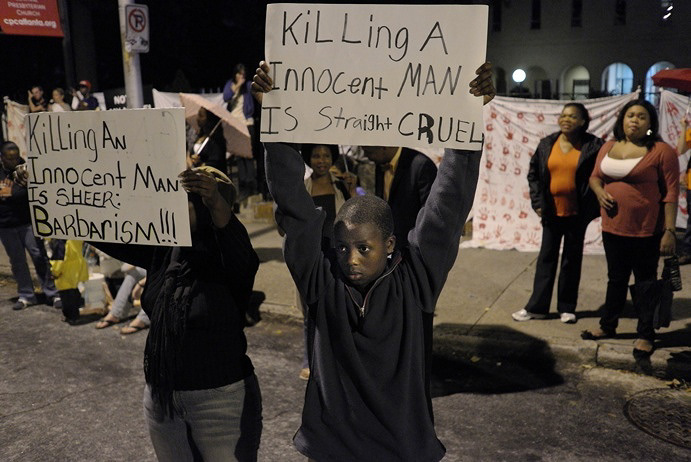 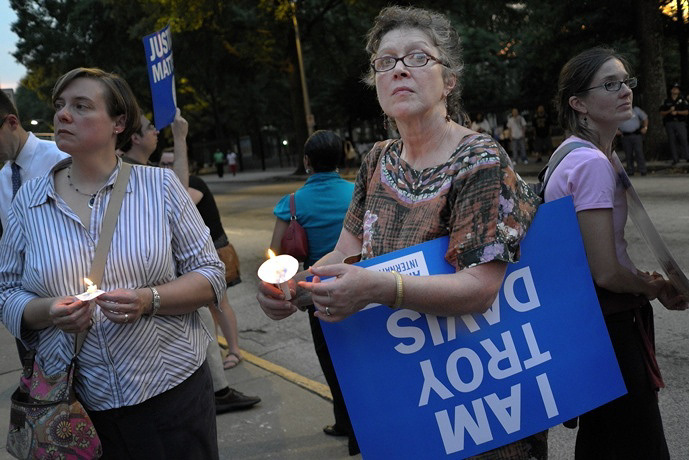 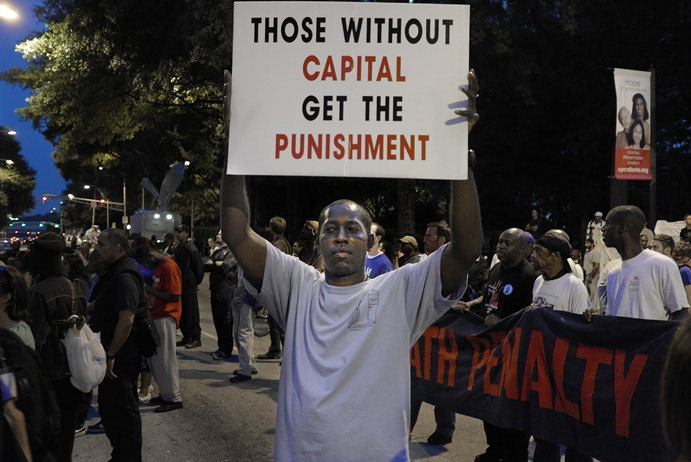 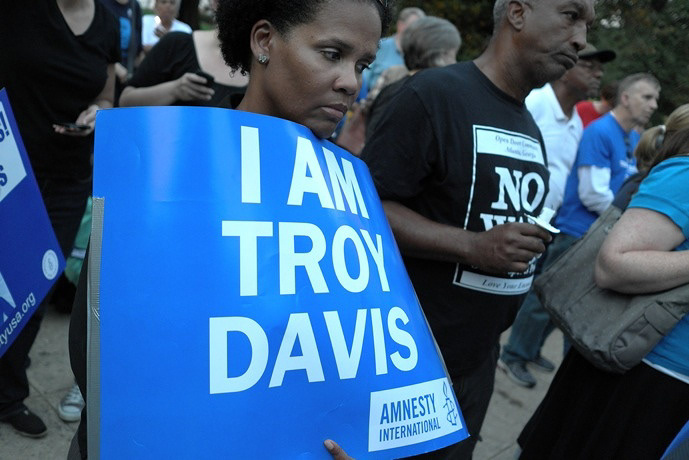 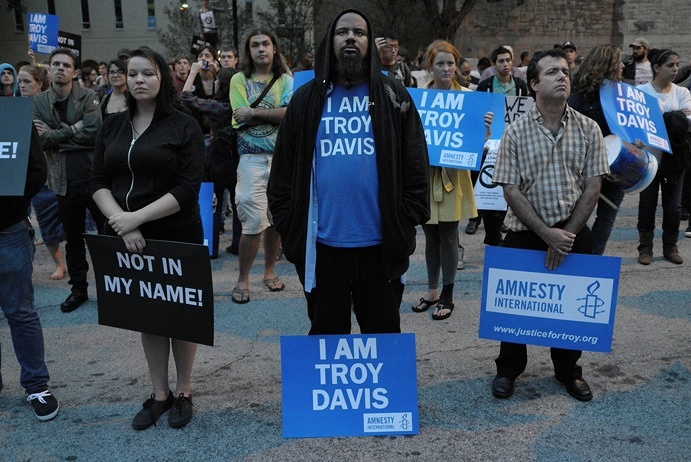 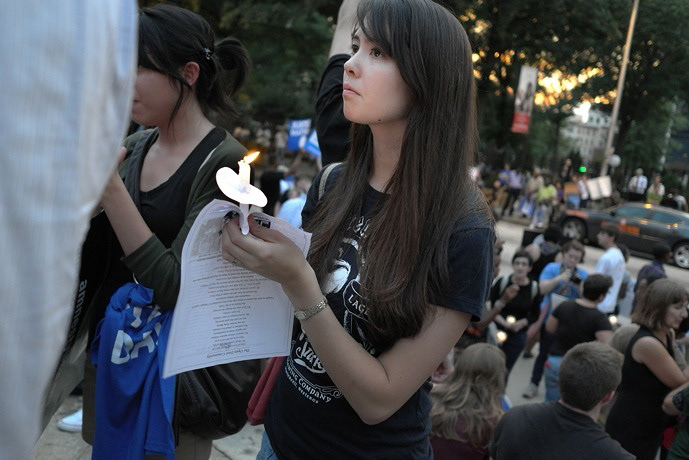 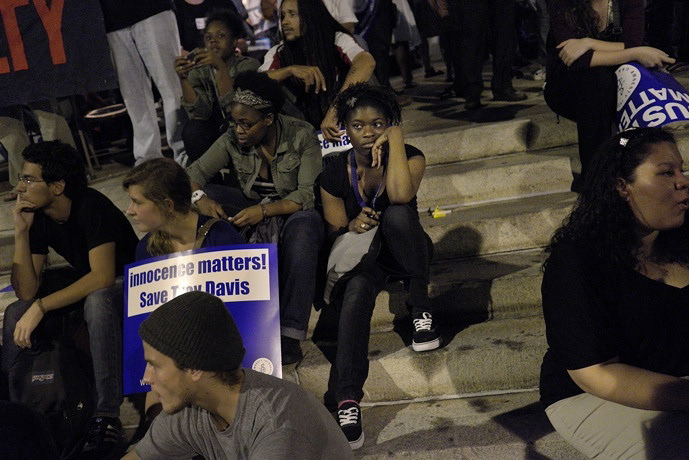 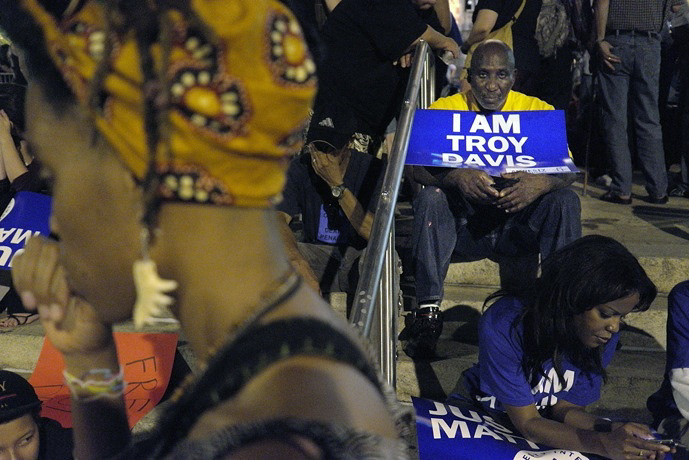 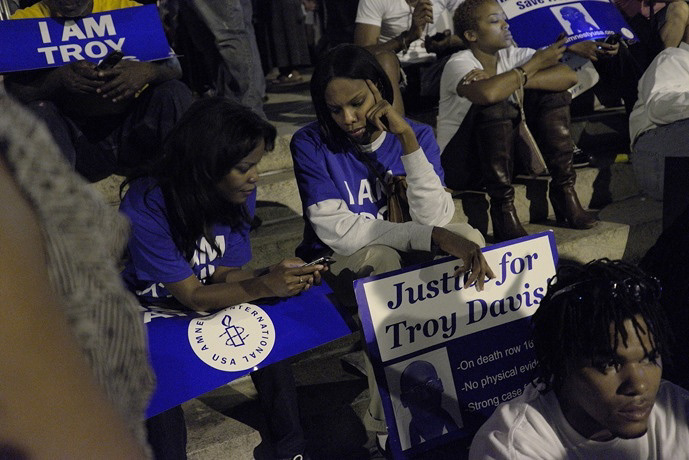 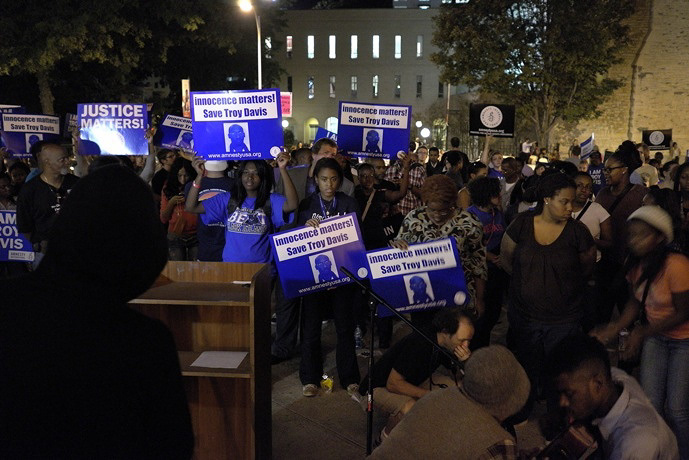 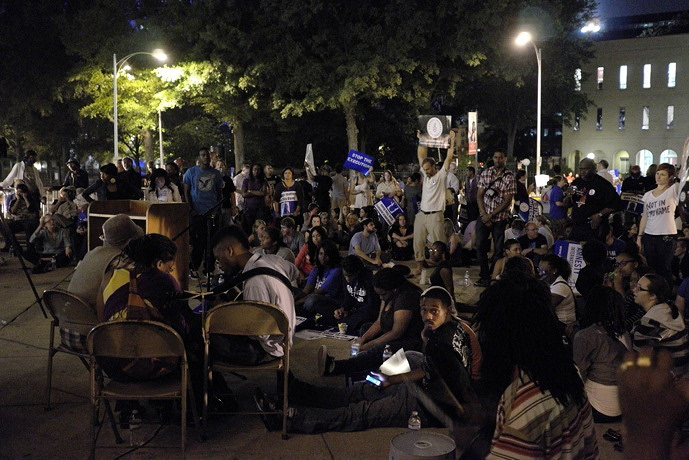 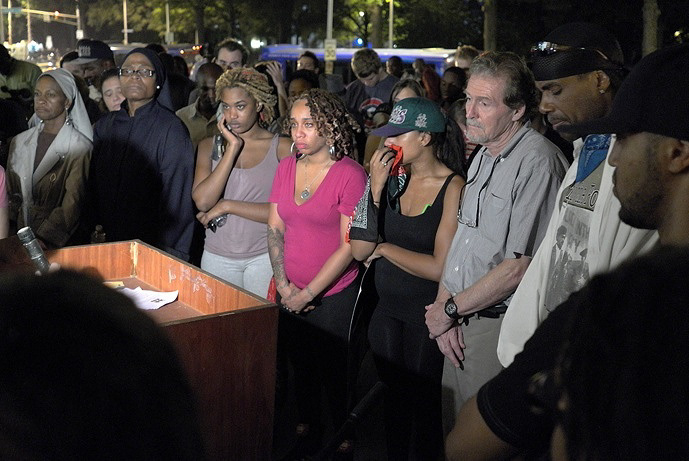 atlanta, september 21, 2011
dear friends,
with sadness i pass along the news, as many are also doing, that the state of georgia is set to kill troy davis at 7 pm tonight, a little over an hour from now, against significant evidence that he was wrongly convicted for the 1989 murder of savannah police officer mark macphail.
davis, as many know, has maintained his innocence from the beginning.  no physical evidence linking davis to the crime has ever been produced, and seven of the original nine witnesses who had linked davis to the killing recanted all or part of their testimony, with several stating that they had been coerced by police to finger davis.  several witnesses later claimed that one of the original nine, sylvester "redd" coles, had confessed to them that he was the actual killer.  despite repeated appeals, davis has failed to receive a new trial.  instead the supreme court in 2007 issued a directive that the savannah federal court consider whether evidence "that could not have been obtained at the time of [the original] trial clearly establishes [davis'] innocence"––a very different standard than whether such evidence establishes reasonable doubt about his guilt.  in a june 2010 hearing in federal court in savannah, judge william moore found the new evidence and testimonies unpersuasive, clearing the way for tonight's execution.  yesterday georgia's board of pardons and paroles rejected an appeal for clemency.
davis' case has become the focus of international attention, and condemnation from across the spectrum of opinion about the death penalty.  when amnesty international, the naacp, jimmy carter, pope benedict xvi, desmond tutu, former FBI director william sessions, conservative presidential candidate bob barr, a group of former death row wardens (including one from the jackson, georgia prison where davis will be executed), over a million people who submitted signatures to the georgia board of pardons and paroles, and the tens of thousands who marched in atlanta and cities around the globe all find themselves in agreement, we can be sure that something is wrong.  recognizing the severity of the crime for which troy davis was convicted, it is clear that the state of georgia will commit the irreversible error of executing a man when reasonable doubt about his guilt exists.
"he was the wrong color," wrote dave zirin in the nation yesterday, "in the wrong place, at the wrong time, with the wrong bank account and the wrong legal team."  "whether the trial witnesses against him were lying then or are lying now," wrote andrew cohen in the atlantic, "by fighting against his requested relief, georgia is saying that its interest in the finality of its capital judgments is more important than the accuracy of its capital verdicts."  in the face of the extraordinary mobilization around this case, atlanta mayor kasim reed has remained silent.  georgia governor nathan deal has remained silent.  barack obama has remained silent.  in the streets, many are choosing defiance over resignation.  "troy davis may die tomorrow," growled a speaker last night on the steps of georgia's state capitol in atlanta, "but we ain't givin' up the fight for justice in america!  we're gonna fight injustice till hell freezes over, and then we're gonna fight on the ice!"
here is the new york times' editorial on the davis case:  http://www.nytimes.com/2011/09/21/opinion/a-grievous-wrong-on-georgias-death-row.html?_r=1&hp
_____________________________________________________
and now, as many of you know already, the state of georgia killed troy davis tonight after the supreme court rejected his last appeal for a stay of execution.  according to the new york times, davis addressed the macphail family from the gurney, moments before the poison was injected into his body, once again proclaiming his innocence.  "i did not personally kill your son, father, brother," he said.  "all I can ask is that you look deeper into this case so you really can finally see the truth."
here is the times' story in full:  http://www.nytimes.com/2011/09/22/us/final-pleas-and-vigils-in-troy-davis-execution.html?hp
included are photographs i made at the five hour vigil at the state capitol in atlanta.
in peace,
jason