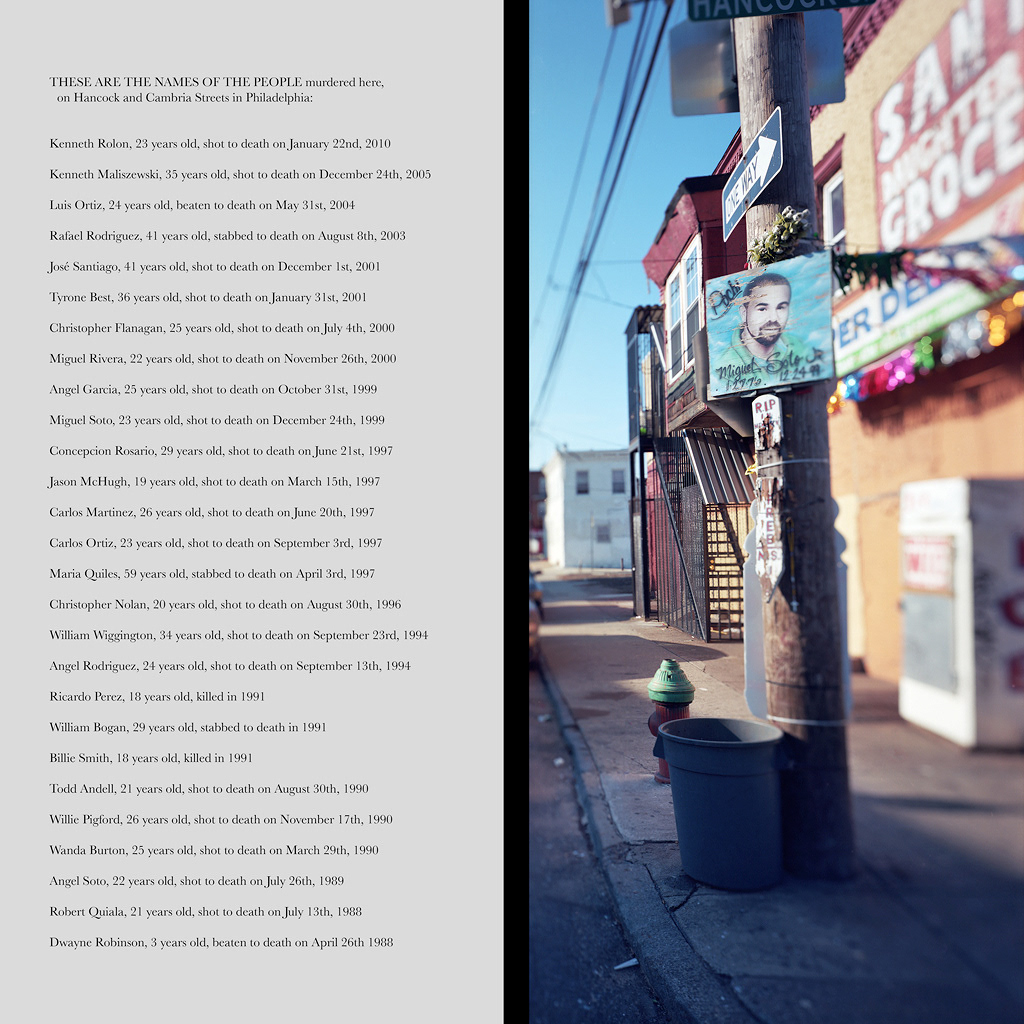 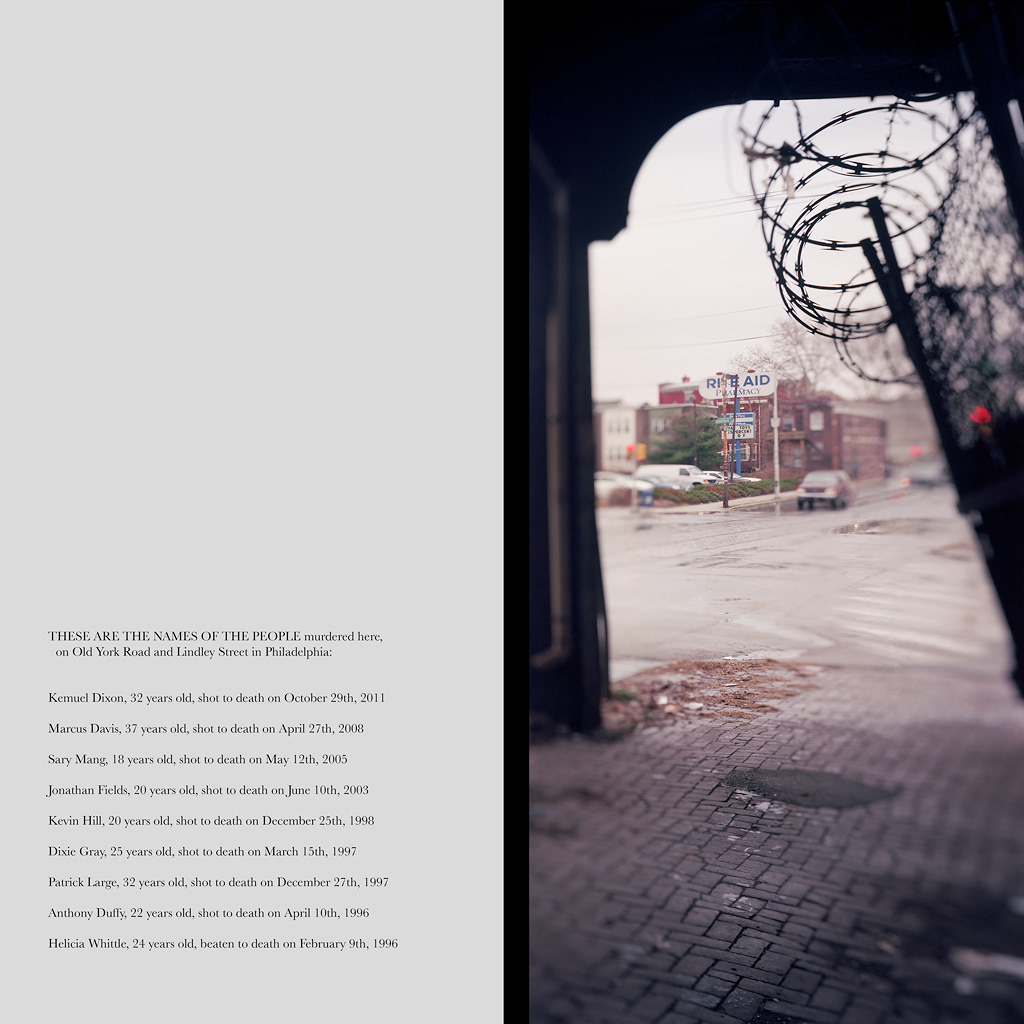 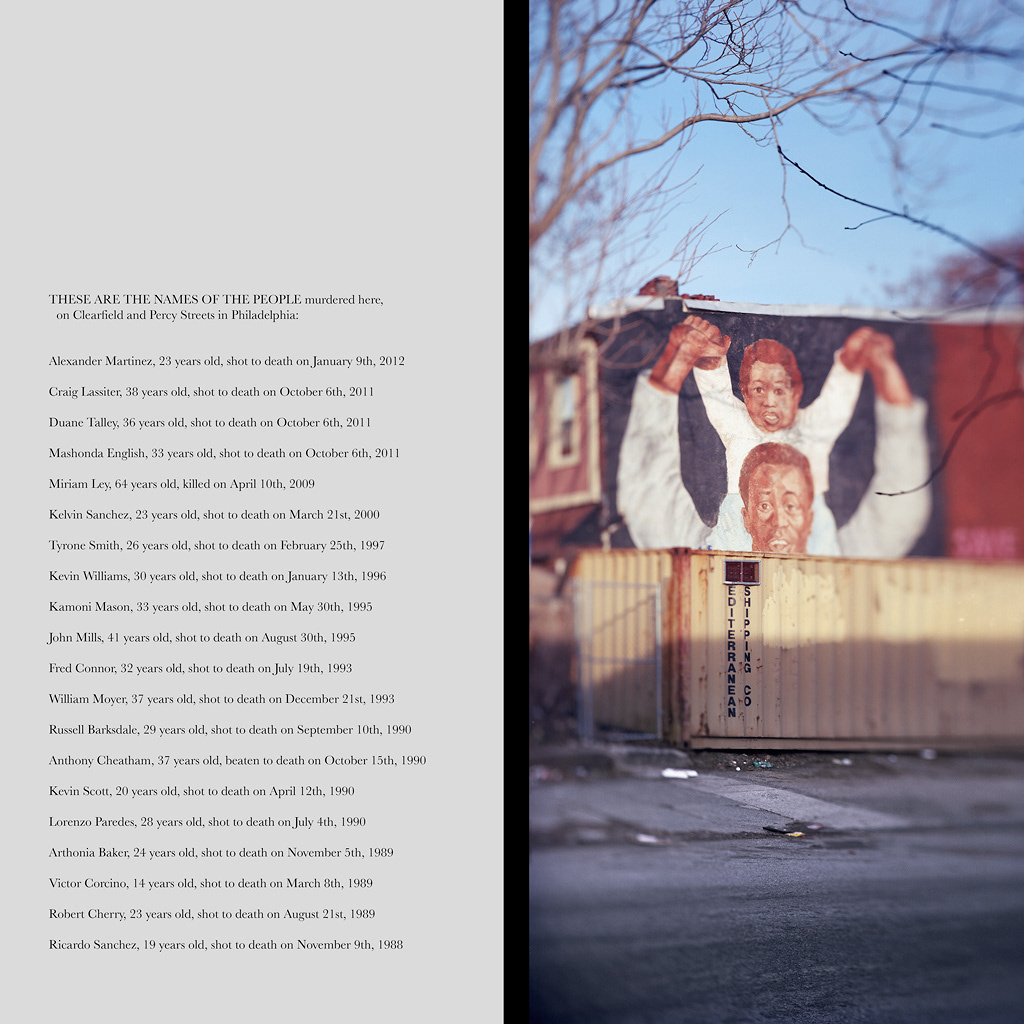 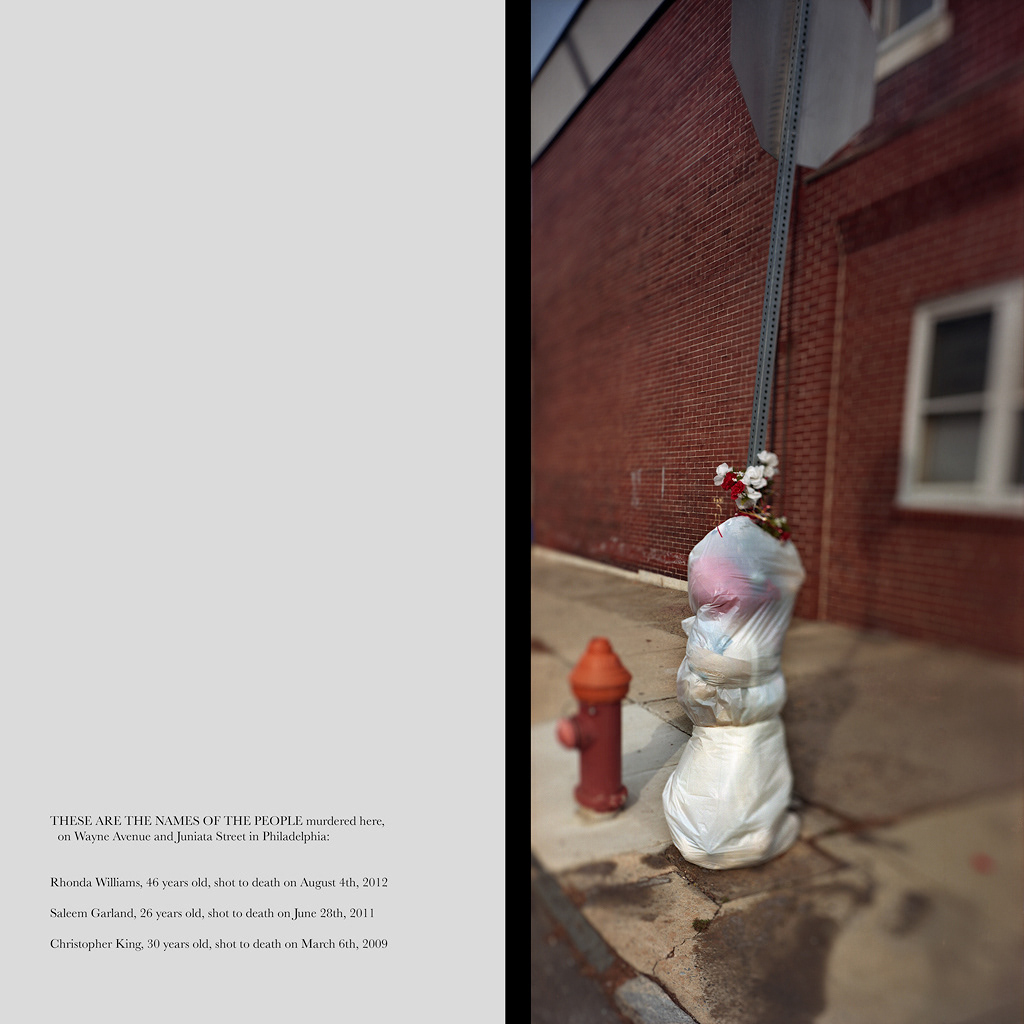 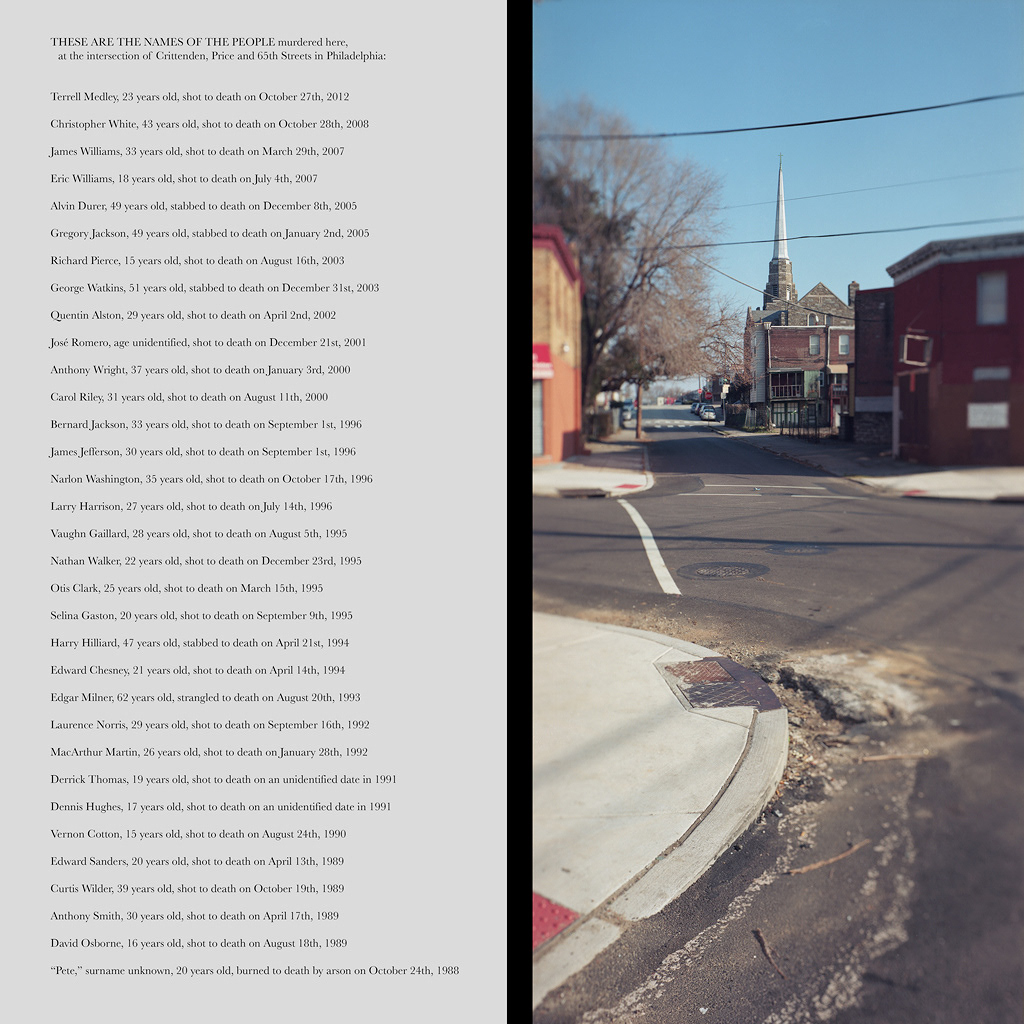 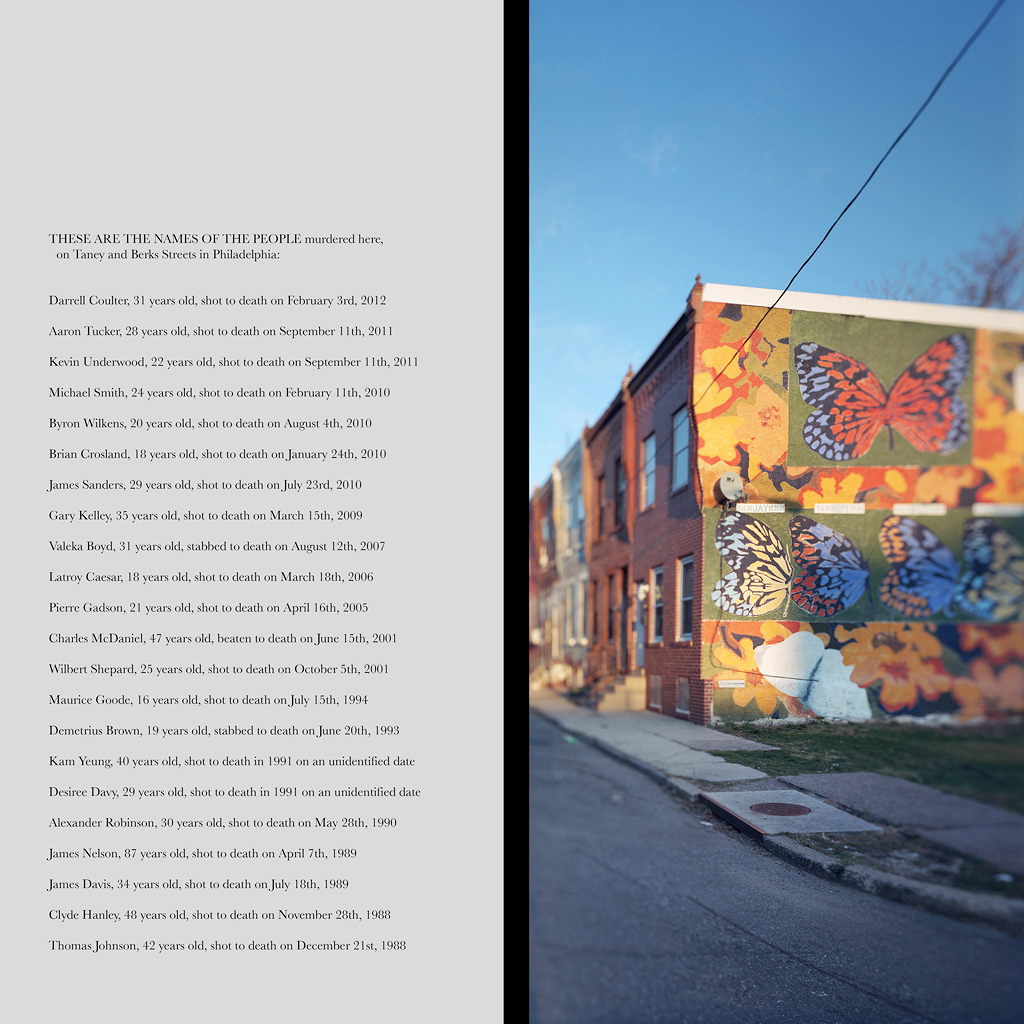 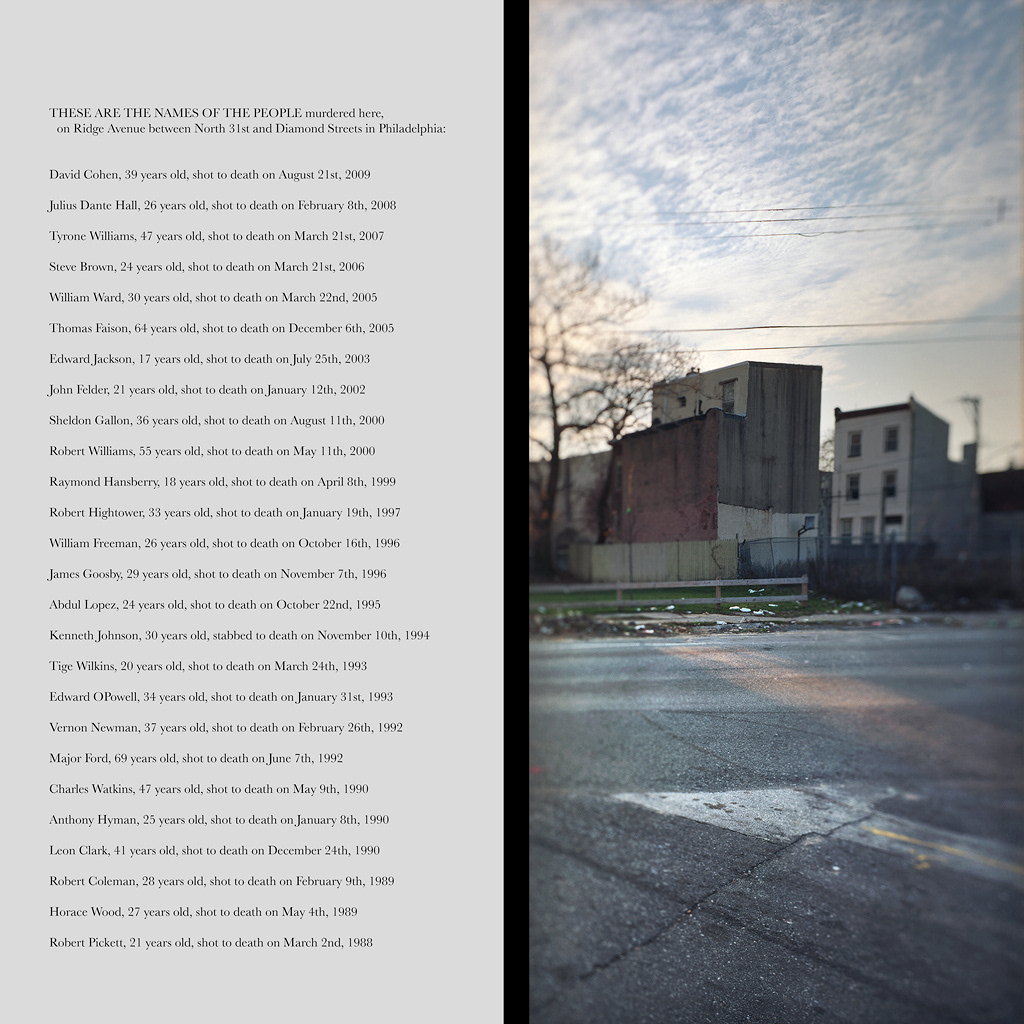 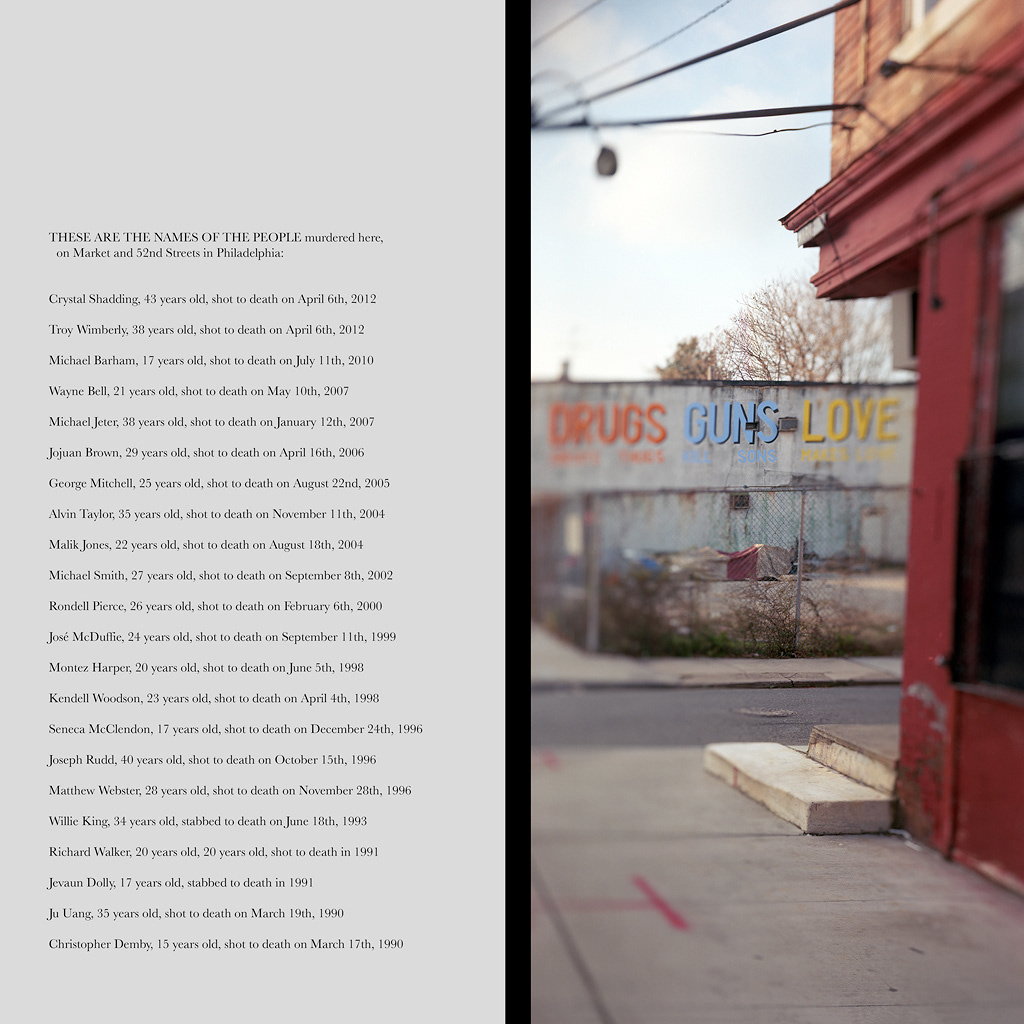 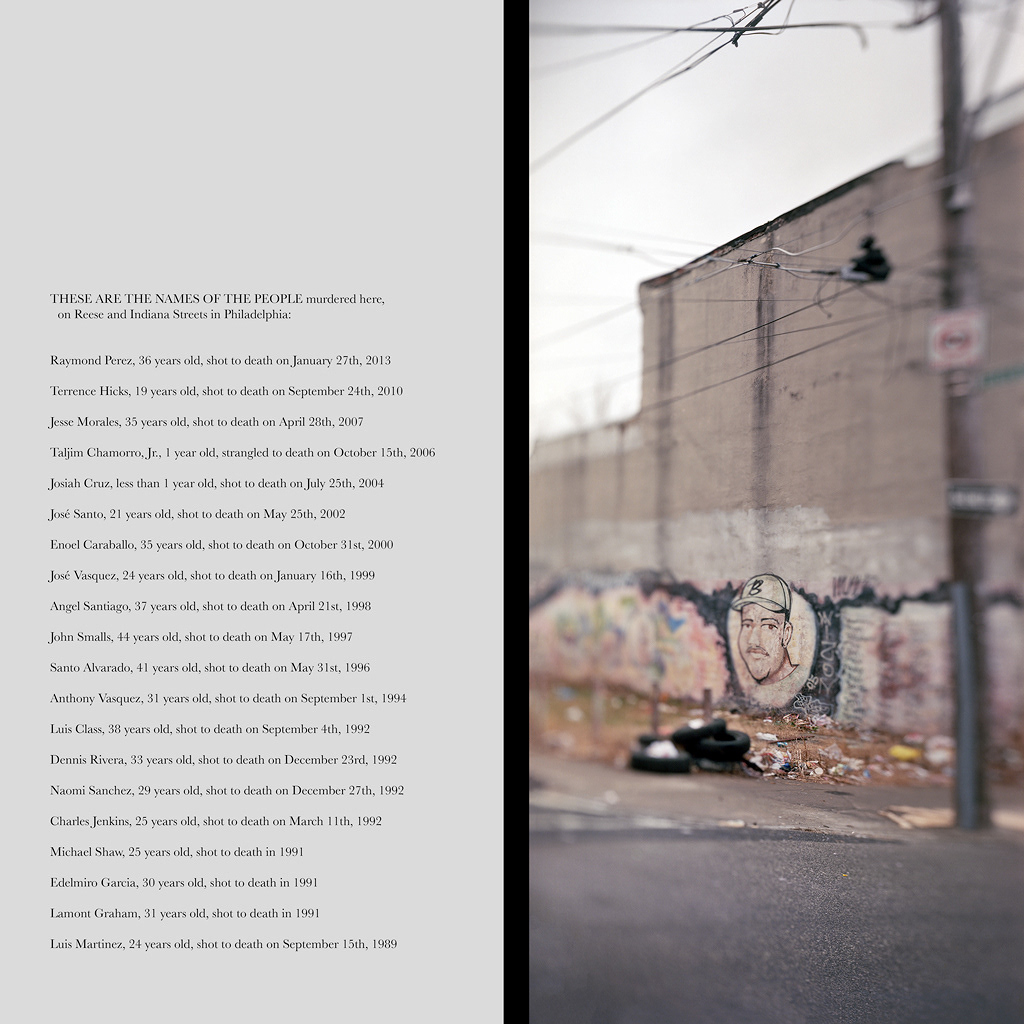 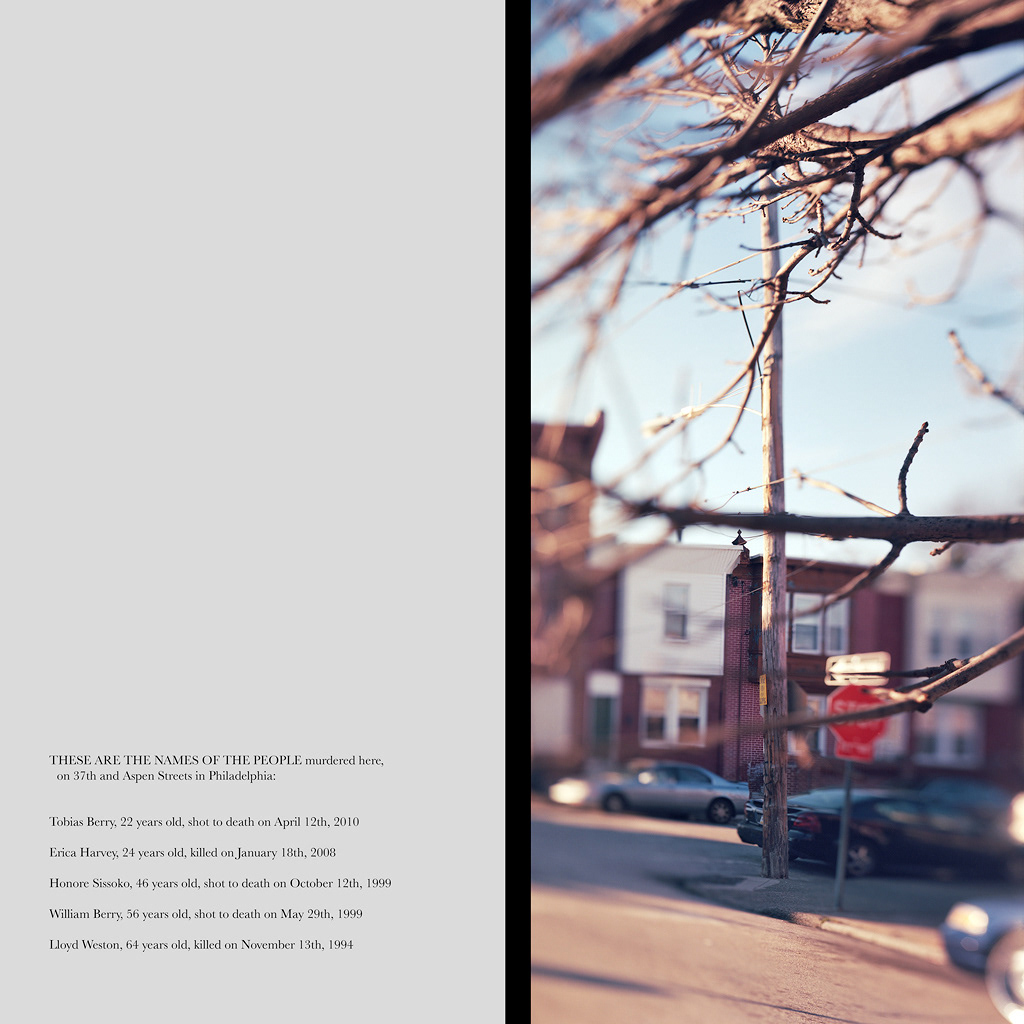 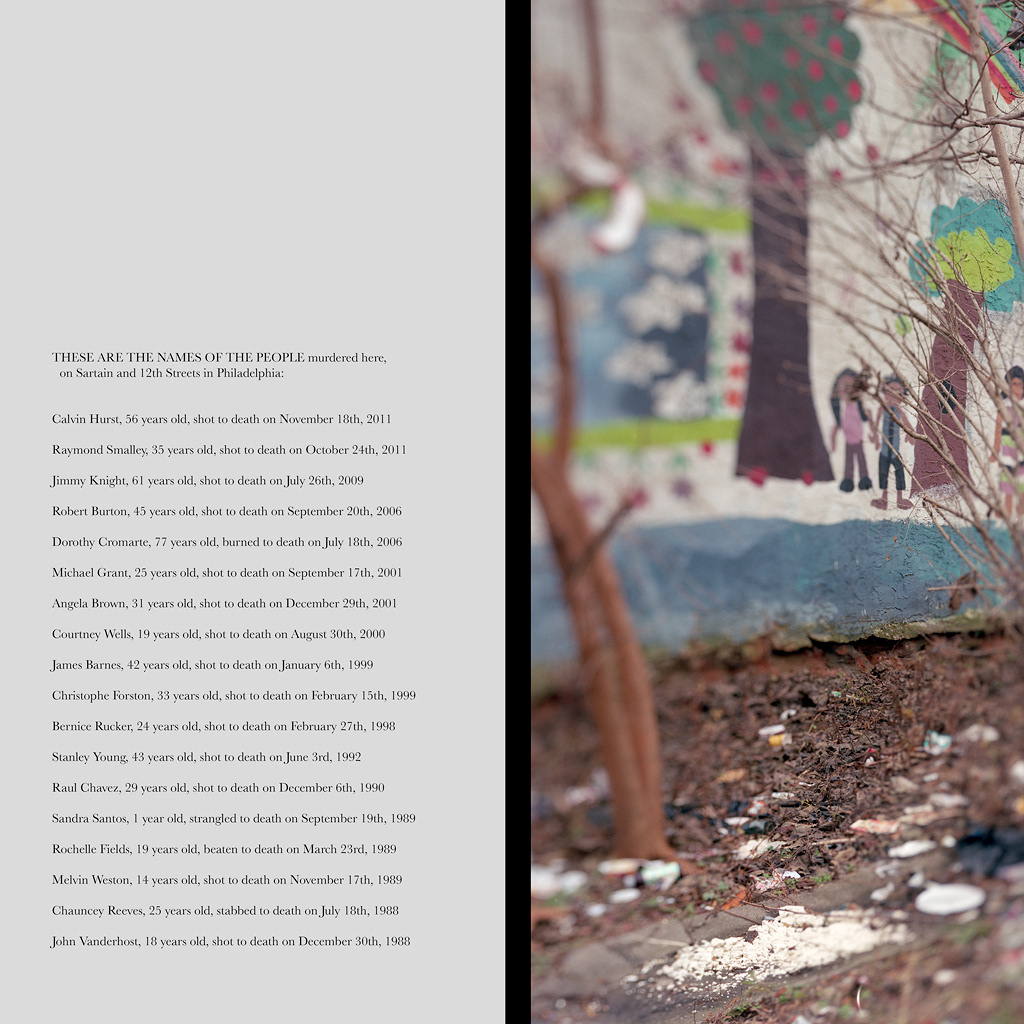 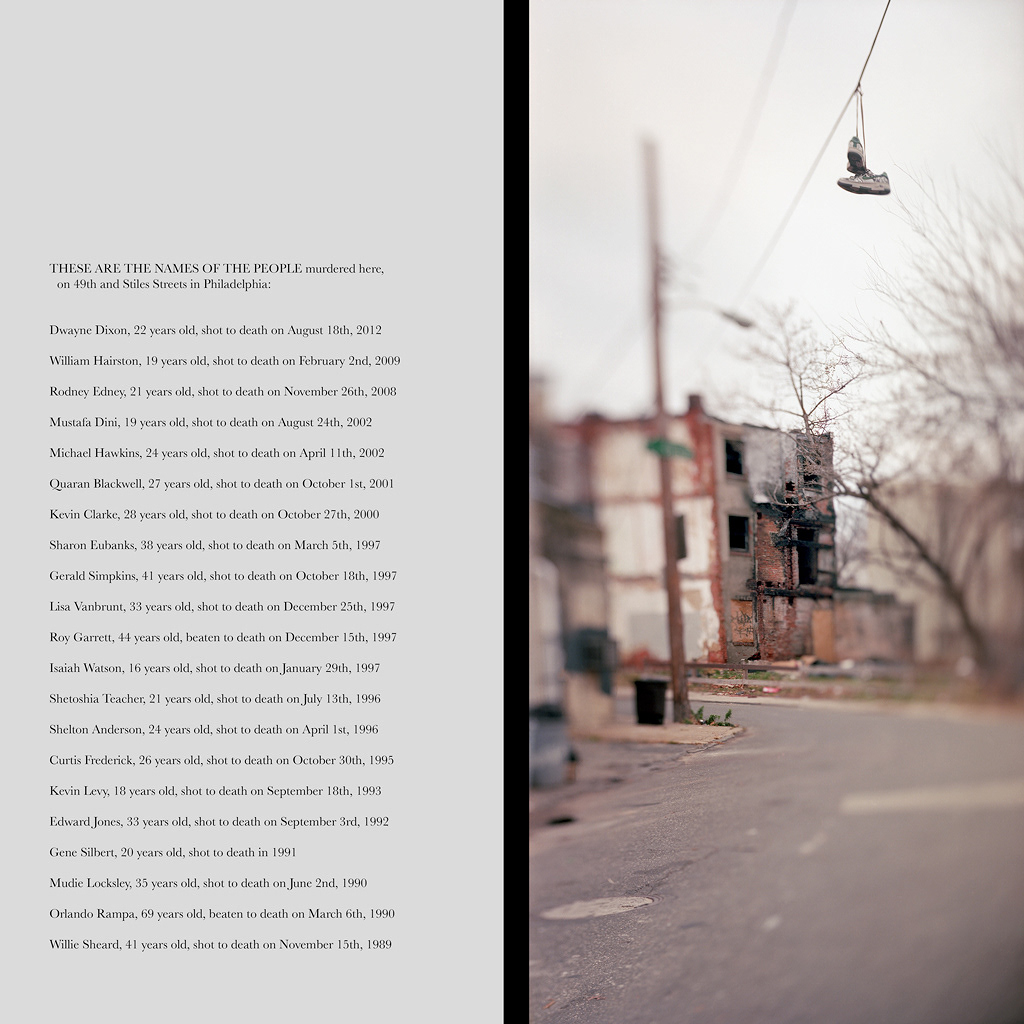 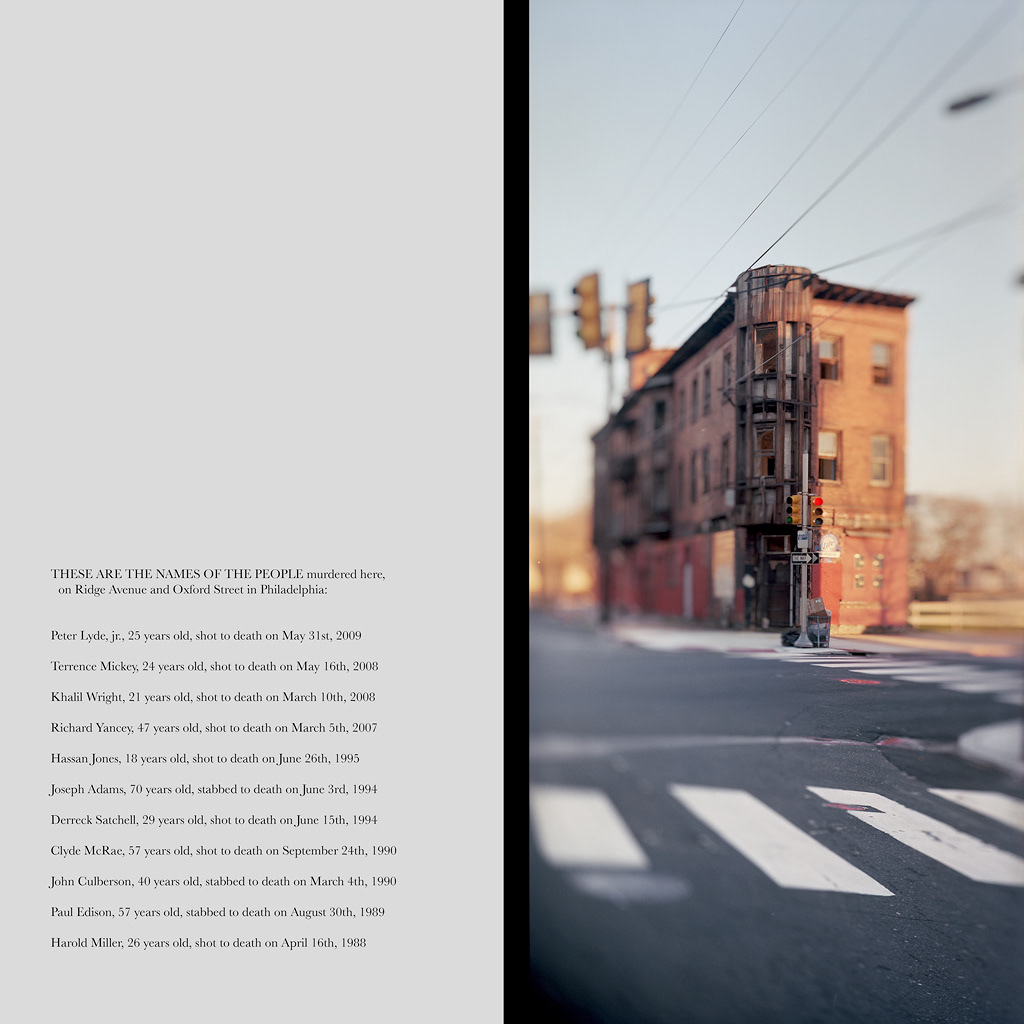 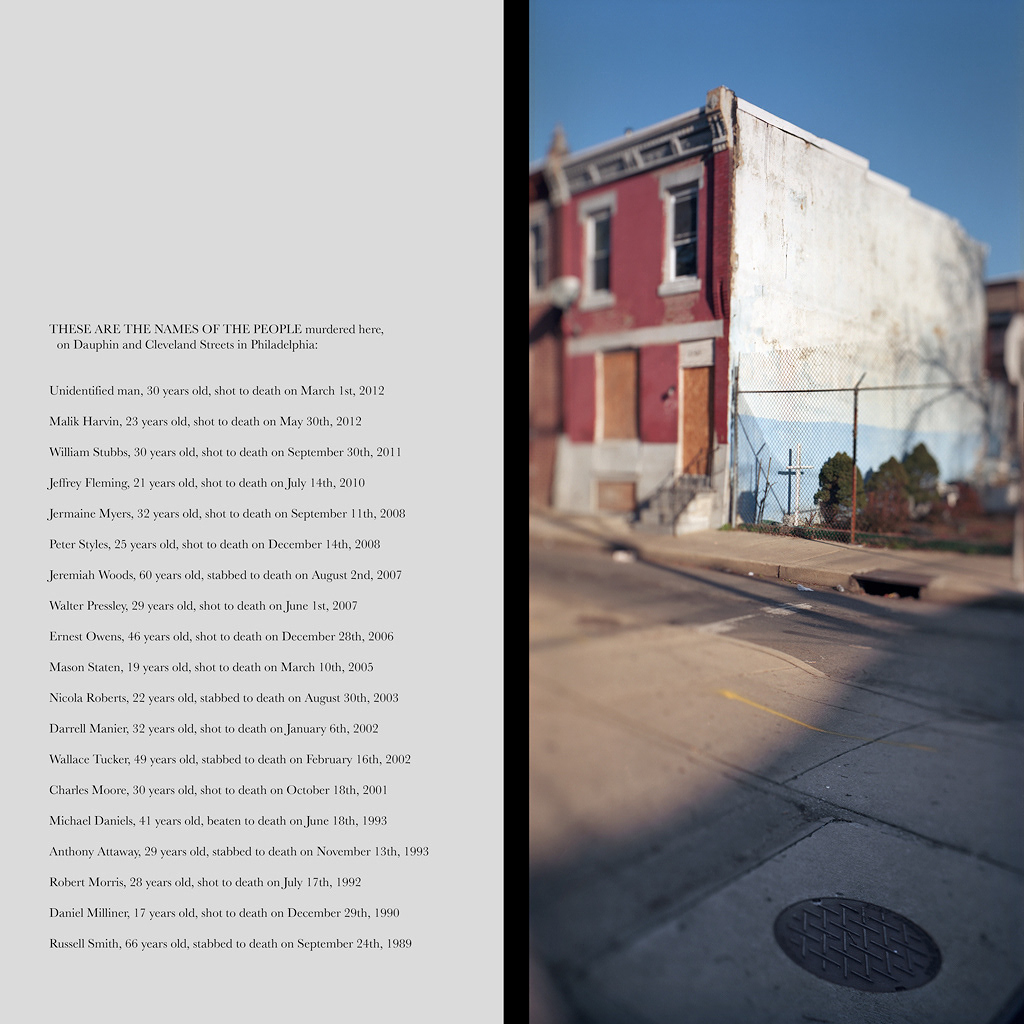 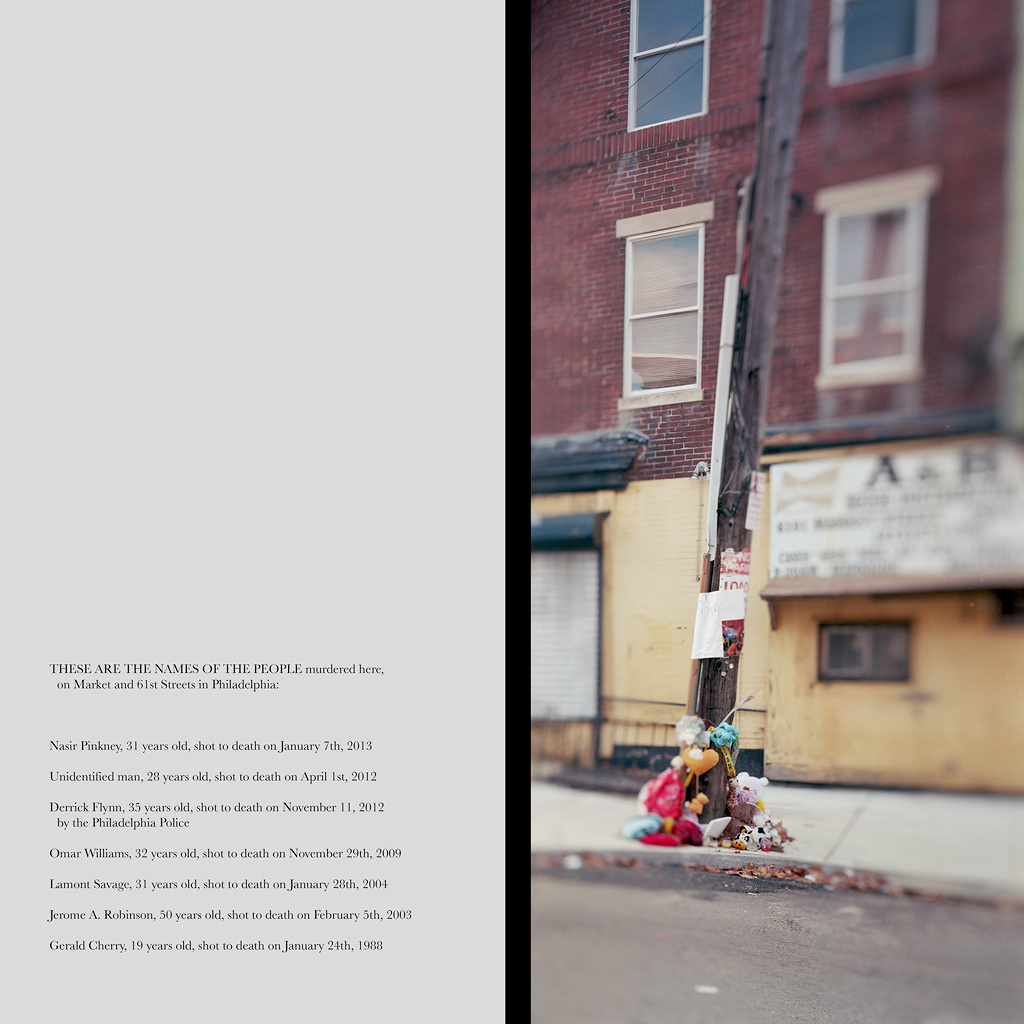 “Philadelphia is closing out another year with homicides up again,” CBS Philadelphia reported on December 30th, 2011.  “Philadelphia’s murder rate was 20.7 per 100,000, the highest rate among big U.S. cities.  The next closest was Chicago, at 15.7.”  The news from 2011 hardly begins to tell the story.  In the last twenty-five years, more than 9,300 people have been murdered in Philadelphia, an average of just under 400 per year.  The vast majority have been shot to death, while others were stabbed, choked, beaten with blunt instruments or with fists, burned, or run down with vehicles.  Almost all have been African American and Latino men.  If “Philadelphia” were the name of a cult of human sacrifice, we would be astonished at its bloodthirstiness, which demands more than one offering per day.

Those in the city and the suburbs who do not live in these neighborhoods find a way to normalize a sense of separation.  Local media create a "news" analogue of the stylized violence which is a staple of the American visual diet––the murder-propelled “action” films and TV shows that thrill and desensitize.  The media’s story is generally one-dimensional and monotonous:  desperate or barbarous young men murder each other in drug deals and petty arguments and gang rivalry, over and over.  The story glances off the reality, asks few if any probing questions, generates little reflection, and registers no urgency.  For the callous among the middle and upper classes, it confirms a core tenet of their Americanism:  “America” is a game of winners and losers, and the (imagined) brutish life of the “losers” is precisely the counterpoint of the aspirations and entitlements of the “winners.”

Or to put it differently, Philadelphians share the same mayor, the same city council, the same roads and power lines and port, slip in the same snow in winter and breathe the same thick air in summer, but do not really consider themselves citizens of the same city.  “Philadelphia is a city of neighborhoods” is a cliché to which Philadelphians frequently return.  To chamber-of-commerce types, the phrase expresses pride in the city's "livability," but to my ears it articulates a balkanized form of civic consciousness that keeps people from understanding endemic problems as common problems.

There are several ways to put Philadelphia’s homicide epidemic into context.  To begin, murder in Philadelphia is closely linked to the easy availability of guns.  The Philadelphia Police Department year after year reports that over 80% of the city’s murders occur using firearms, the majority with 9mm semi-automatic handguns.  Murder in Philadelphia is, by and large, a matter of gun violence.  Gun violence, on the other hand, is much more than murder.  The number of people shot annually in Philadelphia is approximately six times the number killed by gunshot:  in the years 2009-2011, for example, 4557 people were shot in the city, of whom 754 died from their wounds.  Murder attempts with guns, in short, exceed the city’s actual murder tallies by a large order of magnitude.
And we know a great deal more about murder in the city.  Just under half of all murders are the result of arguments, as distinguished from drug-related murders, domestic conflict-based murders and street-based robbery—the other main motives.  Some 80% of murder victims have a criminal record, and two-thirds have a record for violent crime, while just under 90% of offenders have criminal records.  Just under 80% of murder victims in Philadelphia are African American—the city’s largest ethnic group, comprising 44% of the population—and just over 80% of offenders are
African American.  Men account for approximately 85% of the city’s murder victims, and approximately 90% of all offenders.  Nearly two-thirds of the city’s murder victims are between 18-34 years old, and half of those arrested for murder are between 18-24 years.  Gun violence in Philadelphia is, in short, significantly a crisis of young Black men turning to guns to settle arguments with other young Black men.

But lest the phenomenon of so-called "Black-on-Black" violence be explained by racist ideas that blame the problem on a purported Black or Latino "culture of violence," gun violence is itself nested within deep problems of poverty and racial disadvantage.  According to the 2010 census, the median family income for Philadelphia’s 650,000 African American residents is $27,000, while the median family income for white Philadelphians is $45,000.  While both Black and white Philadelphians have seen their median incomes drop over the last decade, for Blacks the drop has been a steep 21%, as against a 6% drop for whites.  Likewise, Black Philadelphia families bring home about $5000 per year more than the official national poverty threshold of $22,300, while white Philadelphia families bring home a median income that is twice the poverty line.  Altogether, one in three Black Philadelphians live below the poverty line, as compared one in six Americans nationally.  These problems represent the ongoing legacy of 250 years of slavery in colonial America and the U.S., followed by another century of servitude by other names, including legalized educational, housing and employment discrimination, political disenfranchisement, and economic disinvestment.  The gains of the half-century since the Civil Rights Movement are real, but still fragile.

The stark racial segregation obvious to any visitor to Philadelphia (evident but perhaps less obvious to Philadelphians themselves) serves as city’s structuring social logic—a term I use advisedly, understanding that it is critical not to flatten the complexity of the sociological issues.  Just why oppression pushes some people into violence and not others is a dimensional problem.  So too are the ways that criminal hierarchies in poor neighborhoods exist within and not against the justice system, and the ways that compounded social and historical pressures break some families apart and not others, and concentrate differently in Black men and women.  Without oversimplification, it seems fair to say that notwithstanding changes since the Civil Rights Movement, the spectrum of disadvantage that defines broad swaths of African American life in Philadelphia—in terms of economic opportunity, income, family savings, capital investment, housing, education, medical care and life expectancy, transportation and social services—amounts to apartheid de facto, if not de jure.

And it would be remiss to speak of American-style apartheid without mentioning the ways that urban neighborhoods and the U.S. prison complex—the largest documented incarceration system in the world—are twinned phenomena.  Philadelphia’s poorest neighborhoods are, for many, tantamount to prisons for those who break no laws, closely linked to the massive national prison infrastructure for those who do break laws, including laws that target non-violent offenders in the so-called war on drugs.  Though African Americans comprise 13% of the U.S. population, they account for 40% of the total U.S. prison and jail population.  One in three African American men, according to the Bureau of Justice Statistics, will go to prison during their lives, and seven of ten African American men who have been to prison return within three years of their release.

And yet, even as Philadelphia’s troubles are not hidden or obscure, the situation is broadly treated as an African American rather than a common problem.  In the 2012 presidential campaign, for example, debate moderators asked exactly zero questions about poverty, race, and urban violence, and Barack Obama’s silence on these issues was conspicuous.  A political realist, Obama was unwilling in a close race to risk alienating center-right middle-class constituencies by focusing on the struggles of the poor in a substantive way.

So I ask myself:  if thinking means looking for oneself, and looking for oneself means reading what one sees, what does deep loss in Philadelphia look like?  I am not a native Philadelphian, but I have known the city for over a decade, and with the curiosity of an outsider––looking at it as a whole and exploring all of its sections.  Over the years, I have learned that every neighborhood, indeed every block is a compounded social phenomenon that by itself requires a long time to understand.  Poverty in Philadelphia is not unremitting devastation, but a patchwork of struggle, on a spectrum from inert blight to dynamic resistance.  To reduce or flatten Philadelphia’s most afflicted neighborhoods to the contents of a police blotter is wrong, and to learn to accept murderous social pain is also wrong.

The photo-text works shown here are an initial effort to grapple with Philadelphia’s worst realities.  I made each of the pictures at locations where murders have occurred, often recurrently.  To find these locations, I relied on interactive online maps.  In particular I relied on one published by the Philadelphia Inquirer using data provided by the Philadelphia Police Department, showing on a year-by-year basis the locations of the crimes, plus basic information about the victims––name, murder date, age, sex, race, weapon, and motive if known.  Using the maps, I have gone to dozens of the marked locations, spent time, talked with locals, and made photographs.  In pairing names with pictures, I counted victims as “belonging” to particular sites when the murder occurred within near eyesight of where I stood to make the photograph.  The result is an emblematic rather than a representative account of Philadelphia's homicidal actuality.

And what would a representative account look like?  As is clear from the screenshot, murder sites are ubiquitous in many neighborhoods.  If, in the spirit of activist public art, I were to place a flag at every murder site from the last quarter century, you could walk for miles without being out of sight of one.  And if, hypothetically speaking, I were to make a commemorative photograph at the exact location of every murder committed in Philadelphia between January 1st, 1988 and December 31st, 2012, I would make 9,325 pictures.  In the year’s time it would take me to do this work––treating it as my full time job––between 300 and 400 more people would be murdered in the city.  Looking at pictures is no substitute for looking at a civilization, a history, a politics––with one’s own eyes––and just so, an elegy is not an explanation.  Those wiser than I am remind me:  to remember is to intervene.  And I respond: to transform the awful dialectic of witness and absence into the redemptive dialectic of justice and compassion requires imagination and not merely knowledge.
Jason Francisco
Spring 2013